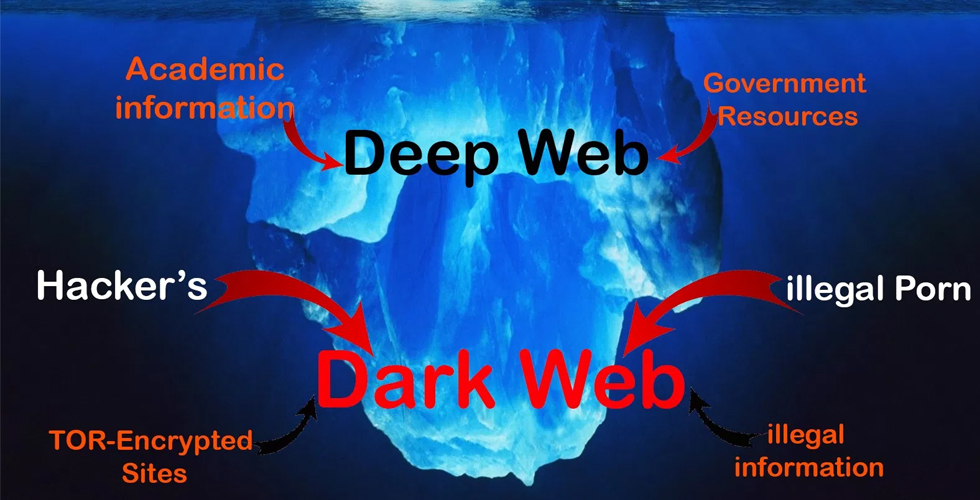 There has been a long debate among the netizens regarding the accessibility on the internet. A lot of people are unfamiliar with the things going on the internet. The internet you explore merely constitutes 4% of the total internet. The remaining 96% is present inside the surface and cannot be accessed by the search engines such as Google, Bing and Yahoo.

The internet consists of many layers and as the layer gets deeper, the internet becomes a more dangerous place. The upper part of the internet which can be indexed by Google and Bing comprises of the Surface web. It consists of all the queries and results that you search on the internet and can be seen.

Below the surface web, there is a deep web and dark web with which you might be familiar. Only a few of us might know that the dark web isn’t the end. The dark web goes deeper further and it has the Marinan web and the shadow web at the end.

Deep Web is that part of the internet that cannot be accessed by the Google or any other search engine. In simple terms, the databases, ideas, web pages and certain images aren’t necessarily indexed by the Google. These databases and all other information constitute deep web.

Deep Web includes your password protected data. It may also include the private chat on Facebook or Twitter, your GMAIL inbox, online banking transactions and statements, your data stored in the private cloud or anything that you can use for only your research.

The common examples of the Deep Web are the government reports, the facebook messenger chat, academic journals and other sites as well. The search engine cannot store cookies and cache these sites. Thus, they can’t be found.

While some say that the Deep Web isn’t safe to browse, this isn’t always true. You need to be aware while surfing the Deep web. It serves some purpose as well. It can be used to access the sites that have been banned by the government agencies in the country. It helps us to keep the anonymity and explore the internet with freedom.

Deep Web has been also purposeful for keeping the data secure. All the online transactions and bank passwords, as well as social media and other passwords, remain encrypted as there is no history of these passwords and login page. Also, this part of the internet has the plethora of sources to get access to the research, journals, archives, academic notes and others which might not be available with the Google.

As the internet gets deeper, the Dark Web lies below the deep web. In fact, Dark Web is a part of the Deep web. While the Deep web consists of the unindexed sites and databases, the Dark web is the encrypted network between the internet and its clients.

The dark web is the part of the internet that cannot be traced or accessed by any means using the standard search engine. All the illicit sites including drugs, armoury, child trafficking or pornography are the parts of the dark web. These dark web sites are available on the internet but it cannot be reached or traced by using these general search engines like Google.

The dark web has mostly the illicit sites which deal with drugs, weapons and armoury, pornographic and trafficking. The most common example of popular darknet markets is the infamous ‘The Silk Road’ which dealt in drugs and was recently shut down by the agencies.

This part of the internet might not be illegal to explore once or twice but if you are a habitual visitor and eyeing to purchase from the dark web, you might end up in the jail.

A number of web browsers such as the Tor browser which displays all the Onion sites. The onion sites are the ones where the Google can’t reach. The Tor browsers route your network through different IPs and take you to the site that you want to access. But the speed becomes slow while accessing them. Using the Tor doesn’t make you any safer; you can still be traced by the FBI and other agencies of the country. Check out this guide by DeepWebSitesLinks.com to access .onion sites safely.

You might be unfamiliar with this deepest part of the internet called the Shadow Web.  Many internet experts believe that the shadow web is just a fiction and it is not related with the reality.

Some also say that the shadow web consists of the most disturbing content on the internet. You can watch a live murder by paying there. It might even be the Bitcoin scams that give access to the Red rooms.

Red Room in virtual, is a live online video streaming site where you can participate and watch live tortures and murders or NSFW.  There are still debates about whether the shadow web exists or not.

Exploring the things on the internet is not always bad as it might also give you some helpful information. But make sure, you are using the internet carefully. To put in the nutshell, I would say that the Internet is a huge room for the scammers and other criminals. Thus, it is always recommended to stay anonymous and protect your identity.